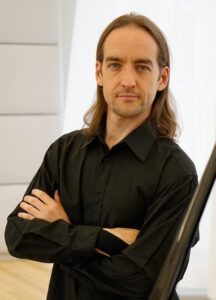 Gaining increasing popularity with audiences for his entertaining and informative Concert-Lecture Series ‘What is so great about Classical Music?’, Mr.Toth brings audiences closer to Great Classical Music in at least 5 languages to date, and has performed in more than 30 countries. He was an Instructor at the Hochschule für Musik Theater und Medien Hannover for 10 years, and is currently on Faculty at the Dr Hochs Conservatory in Frankfurt, Germany,  the Accademia del Ridotto in Stradella, Italy, and the Center for Music and Language – ZMSHannover, in Hannover, Germany.
He holds multiple degrees from the University of Toronto, the Royal Conservatory, and the Hannover Hochschule among others. A recipient of numerous prestigious scholarships from the Canada Council and the DAAD, he has also participated in Masterclasses in Banff, Kneisel Hall, the Mozarteum in Salzburg, Hamamatsu, and the Wilhelm Kempff Foundation Beethoven Masterclasses in Positano.
As 3rd Laureate at the 52nd Busoni International Piano Competition in 2000, Mr.Toth was engaged for concerts in Croatia, Italy and Brazil.
Prizes in a dozen other competitions resulted in many international invitations and performances. He has appeared with diverse orchestras and in recitals as a soloist and
chamber musician in both North and South America, Japan and Europe and has recently been invited in Russia, Thailand, Japan and China. He has also served as guest professor and lecturer for master-classes at Universities in Canada, China, South America and Europe.
Mr. Toth has recently restarted the Complete Beethoven Sonata Cycle in Germany, Italy, Spain, and Canada in 2017, and will be starting and finishing the Cycle in the UK in 2020.
He is currently the Artistic Director of the “Music for a Better World” Benefit Concert Series in Frankfurt which supports organizations such as Greenpeace and Amnesty International amongst numerous others. When not practicing, teaching, working or performing, Mr.Toth also trains in Shaolin QiGong and Shaolin Kung Fu, and is also a certified Yoga Instructor having obtained his Yoga Teacher Training Diploma in India.